Planning to Do Self Drive Vacation While You are in India? A Must Read Before You Start Driving!

In case you want to drive in India, first of all, it is better to forget your home country’s traffic rules and guidelines. Indian traffic is in no way like any other traffic you ever experienced. It is chaotic and a huge wreck where laws are made, yet are never followed. Traffic makes its very own unwritten rules that can just be experienced. In the event that you are truly serious about driving in India, then this article is for you.

Note that the reason behind this article is not Indian traffic legislation, yet to show the truth of how it truly is.

When in traffic you can come across a wide range of road users– from pedestrians, animal carts, cars, SUV, motorcyclists and three-wheeled auto-rickshaws to buses and trucks. And also animals – from cows, goats, monkeys, sheep, buffalos, elephants and camels. You can discover cows pretty much everywhere on the road. Since cows are treasured in India, hitting one of them can cause heavy fines and even mob violence!

Hone your sense of hearing since it is crucial to handle Indian traffic. Most foreigners don’t understand why there is so much honking. Things being what they are, what is the honking about? Essentially, it is only a communication method. For instance, whenever somebody is going to overtake you, they will give you a honk. It isn’t discourteous in any way– that is only the way in which they let you know that they will try to overtake you. Honking is additionally utilized at blind corners to caution opposite traffic. In this way, honking is fairly a safe habit and has nothing to do with being impolite. In India, you must develop the honking habit as the driving culture is yet to get refined.

It is normal to spot drivers in India chatting on their cell phones while driving. Some even text message, Whatsapp and Skype on the interstate. This is highly risky as using a phone takes your attention from the street. While some may say that one can drive mindfully while using the hands-free feature, studies demonstrate that it can still take away the driver’s mind from driving. The safest way is to request one of the passengers to answer the call if it is urgent or stop in a spot before answering.

It may seem like mirrors aren’t important. It is true that most people don’t use them. However, choosing not to check your mirrors when changing directions or lanes can be extremely risky. We emphatically advocate checking mirrors (Outside Rear View Mirrors & Inside Rear View) whenever changing lanes.

Truly, blinkers are utilized so rarely that you would overlook them yourself when joining Indian traffic madness. However, sometimes, you can see individuals putting their hands out of a window, pointing right or left. They want to let you know that they will make a turn.

You can also notice that the right side blinker is blicked for 2-3 seconds for indicating the permission to overtake! This signal is mostly used by the truck drivers and please don’t get mislead for the turn indicator which will be a long blinker (not 2-3 seconds)

Some times you can see that the hazard indicator (blinking both turn indicators) is used as a signal for taking the straight road by not any sides. Also, the hazard lamp is blinked for a style statement by some teenaged bikers!

Please don’t get misled by those signals and having a precaution and understanding about the blinkers can be quite helpful if you are planning a self-drive!

Having a safe distance? Just won’t work in India. When you leave a gap between you and the vehicle before you, somebody will more than likely fill the gap and cut you off.

Be prepared to be encompassed in each direction and every inch of your vehicle by other vehicles, people and animals that are cutting you off in each possible chance that they get. Trust us, when we say that your right foot will be constantly lying on the brake pedal while you drive in the city.

Numerous drivers unnecessarily use the high beams and hight beam – low beam blinking combinations. This feature should only be utilized if there extreme low visibility and no traffic. In the event that you can’t drive without the high beam, getting an eye check-up done is a must.

Expect potholes everywhere in India! A flawless-looking road can all of a sudden shock you with deep potholes as if somebody has tossed a hand grenade on the street. The more rural areas you go to, the more extreme it can get.

The most deceptive and maybe perilous part of the street is the speed breakers. Many times you can discover them absolutely unmarked, on shady areas and curves. It can wreck your vehicle and maybe even roll it over. You can expect unmarked speed breakers at towns and villages.

While driving in India, keep in mind, Indian traffic is right hand left side drive. But in reality, traffic stream can be nearly from each direction! 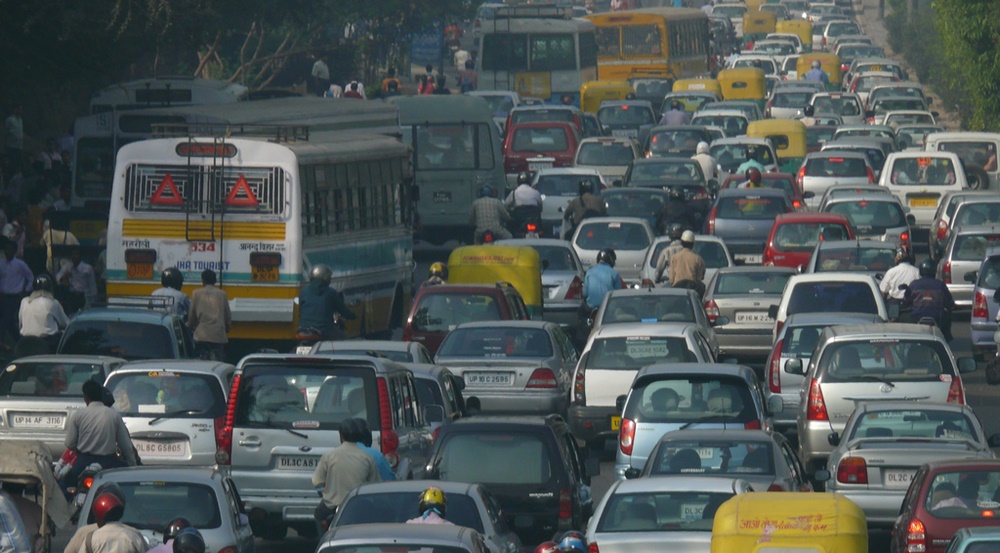 It is unpredictable, slow and tense. Maybe it won’t be wrong to say that India is a huge traffic jam. Metro cities like Mumbai, Delhi traffic jams during rush hours can keep last for hours. Things can get considerably slower when festivals and celebrations happen, for example, weddings.

Do not forget to approach to the junctions with care. Never assume that you are on a road and everybody needs to give way. Junctions are stuffed with vehicles, all of them trying to get out of there, simultaneously.

Envision endless traffic stream at the opposite side of a street; gradually break into traffic stream inch by inch till you cut off the entire traffic-That is the way how U-turn is done in India. It happens regularly.

Some drivers have no clue what lane discipline implies. It just disturbs the traffic flow and furthermore increases the chance of an accident.

Imagine everything mentioned before during the night hours. Driving in India during the night is not suggested at all since accidents are anything but difficult to occur on Indian roads. Your vision will be reduced by pollution and oncoming traffic lights. That makes a high chance to drive over a person on foot or a cyclist. So driving during the night is a simple no-no!

Want to know some bike riding tips for your holiday in India? Find out here.