Onam is one of the most prominent festivals of Kerala, depicting Kerala’s rich cultural heritage. Rich traditions, customs, and magnificent history can be seen during the celebration. Onam goes on for ten days– the festive spirit of grand celebrations attract people from every corner of the world.

People all over Kerala celebrate this festival regardless of their caste and creed. It falls in the month of Chingam (August- September) as per the Malayalam calendar.

Preparations for the Celebration

During the Onam celebration, people of Kerala beautify their home with new flower mats, locally called ‘Pookalam’, to welcome back their King, Mahabali. They wear new clothes and visit the temple to honour the main deity. Prayers are offered and chanting of Mantras fills the entire place. The celebration unfurls the rich cultural legacy of Kerala through traditional dance, for example, Thiruvathirakali and Thumbi Tullal.

The ten-day celebration is a period for deserting all stresses of regular day to day life, and for getting absorbed in festive zeal. It is a harvest festival which gets happiness in people’s life. You will get a peek into the secular spirit when individuals from all religions, caste, and creed celebrate this festival with much grandeur and glee. The celebration shows the solid faith of Keralites and their faith in the incredible past and power of prayers. The legend behind Onam is deeply rooted in the minds of all Malayalees. Onam legend goes this way…

According to the legends, Kerala was led by an incredible King – Mahabali. He was a proficient ruler and extremely kind-hearted individual that his rule was known as the “Golden rule of Mahabali“. His graciousness and liberality made him well known and most loved leader of his kingdom.

The Kingdom of Mahabali

Mahabali was a good ‘Asura’ King. The land got flourished and there was peace everywhere in the kingdom. A kingdom was much better than the heaven with no lies, crime, or animosity, so the gods of heaven got envious of the capable ruler, Mahabali.

As per the legends, the celebration celebrates the arrival of King Mahabali, the Asura King who was the previous King of Kerala. Unlike other Asura Kings, he didn’t do anything incorrectly or evil; which is why he was permitted to visit his people once in a year, that is on Thiruvonam day of Chingam month. In this way on this auspicious event, Keralites are filled with bliss and euphoria. To celebrate the occasion, individuals deck their homes for the warm welcome of god.

As per the Shastras, the performer of 100 Yajnas will be able to be the leader of both heaven and earth. Prahlad’s child, King Mahabali, played out the Ashwamedha yajna. In spite of his dedication, he was considered as a risk to the Devas.

The arrival of Vamana the Brahmin Dwarf!

He turned out to be so famous that Gods thought that he may become excessively powerful and strong. While playing out the last yajna of the 100 yajnas, Lord Indra went to Maha Vishnu dreading for his rule. So as to avoid King Mahabali from ending up more powerful, Maha Vishnu took the incarnation of Vamana, a dwarf Brahmin and visited King Mahabali.

Vamana requested that the King give him three paces of land. The King was generous and kindhearted that he looked at him and requested him to ask something more than that. Master Sukracharya, the master of evil spirits, understood that this Vaamana brahmin was not a normal man and is playing some sort of trick with the King. So he asked Mahabali to deny any kind of boons. But the King was so kind that he didn’t listen to the advice of Guru Sukracharya and decided to grant three paces of land to Vaamana.

Vamana expanded his height, which nearly reached the sky. In his first step, he took the sky, with his next one, the entire earth. For the last pace, no space was left so the king offered his head. So, the Vaaman did and Mahabali was sent to the Patala (the subterranean realms of the universe). But Lord Vishnu was so impressed by his kindness that he showed up in his Viswarupa avatar and gave him a boon. King Mahabali then asked for a wish that he should be permitted to visit his kingdom once every year and see his people. Vishnu agreed and from that day onwards on the auspicious occasion of Onam celebration, King Mahabali makes a visit to earth.

The most fascinating aspect of Onam is the games and cultural events that take place everywhere in the state. They arrange a number of games to add more excitement to the celebration festivities. Some of the significant games incorporate Talappanthukali, Kutukutu and combats, for example, Kayyankali and Attakalam. All together these game events are known as Onakalikal. They do not play these games nowadays and people are more inclined towards Tug Of War and other fun games.

A variety of team sports are also organized on the day. Onam also helps to create an atmosphere of calm, peace and brotherhood. It is the passion and pride of the people of Kerala and India. 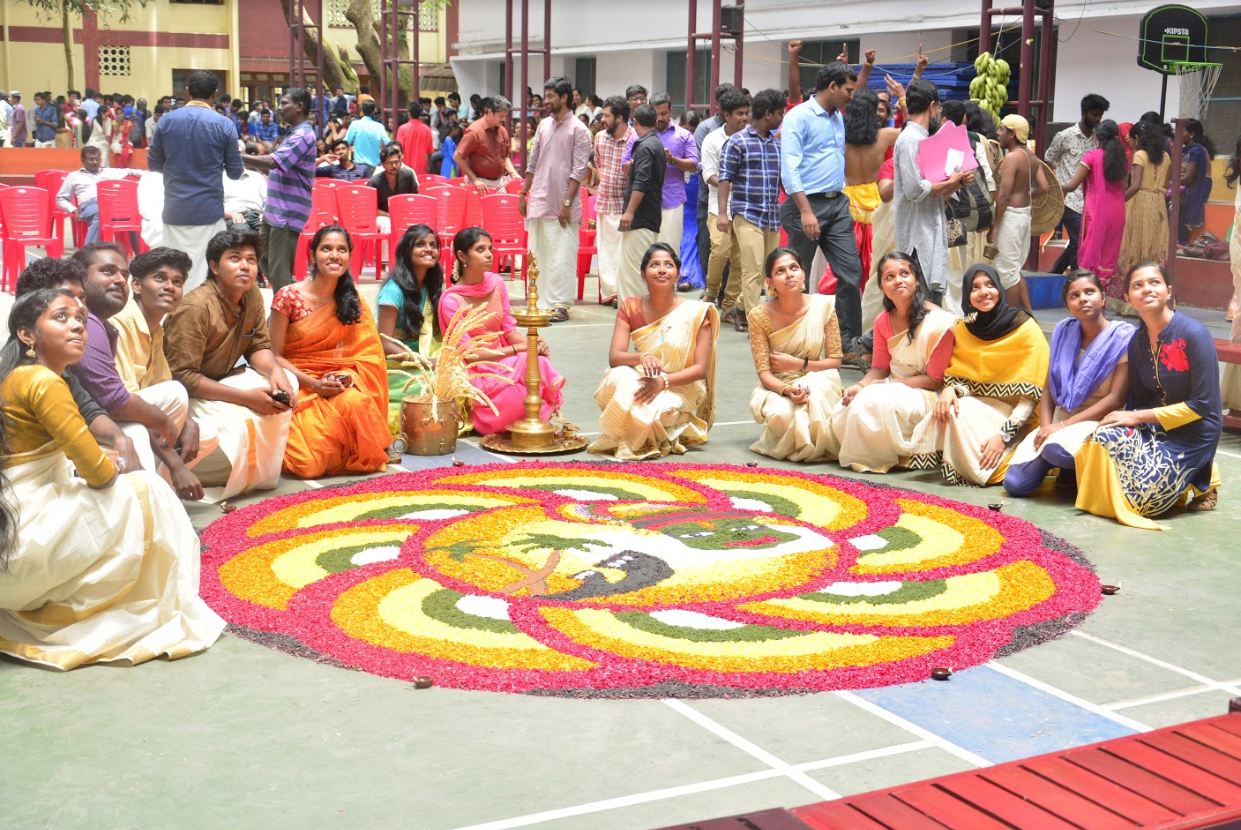 Onam Festival bonds the individuals of all religions and you will see the whole of Kerala state in a festive frenzy. It is the most significant annual occasion for every Malayalee. Everyone regardless of the religious beliefs or diversity take part in this festival– it is the only festival which they celebrate together even by the outcastes, Christians, Muslims and the high castes. The surroundings also seem to join in to celebrate this auspicious occasion, with the blossoming of an assortment of flowers, sighting of many butterflies, and melodious chirps of birds.

Onam brings out the best of Kerala traditions and culture. Exotic Kaikottikali dance, intricately decorated Pookalam, Snake Boat Race and incredible ambrosial Onasadya are some of the most significant features of Onam festival.

Onam celebration goes on for ten days, beginning on the Atham day of the Chingam month. The courtyards of the houses, workplaces, will have unique flower decorations – Onappookalam or Athappookkalam. The schools in Kerala also remain closed for those ten days. Children play, go to gather wildflowers to create ‘athappoo’, sing and dance. The elders additionally gift their kid’s new clothes, etc. It is the ideal opportunity for family members to be together and to celebrate.

The first day of Onam is Attam. As the day starts, ladies wake up early, take a shower and wear a white sari with golden zari border. They deck themselves with beautiful jewellery and pleasantly stick the strings of flower in their long black hair. After that, others also dress up in new garments and prepare for the festival.

People would smoothen their house yards with cow dung in olden days. Then the east side of the house has fresh flower decorations as it is a sacred thing in Hinduism. Flower rangolis are made on the front door/gate which is commonly round in shape. There is a cone-shaped idol in the centre which symbolizes God Ganesha/ Thrikkakkra Appan.

For the next ten days, till Onam is over, every day they smoothen the place with cow dung and decorate it with fresh flowers. People sing and dance around the Attam to celebrate their King Mahabali’s visit to earth. 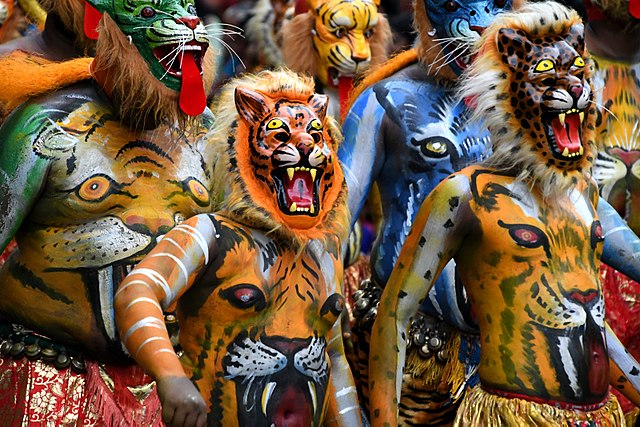 Onam is additionally the carnival period of Kerala, individuals take part in an assortment of activities such as ‘Pulikali’ where people dress up like panthers or tigers, boat racing, ball games, dramas, playing marbles, and the list is endless. Ladies additionally participate in singing, dancing and so on. There will be additionally dance shows of Kathakali, Mohiniyattom, and so forth and martial art shows like Kalaripayattu. 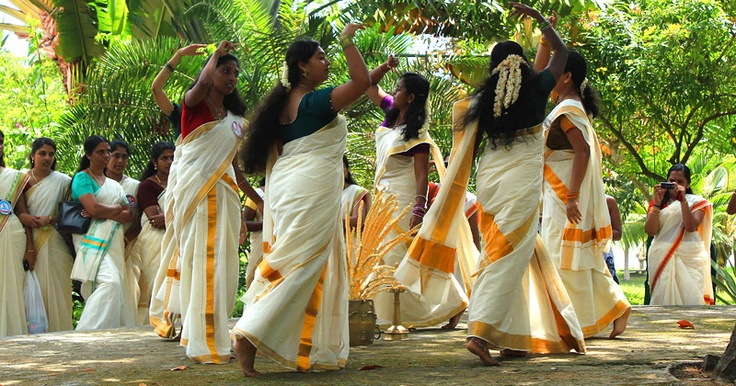 The key fascination of ‘Thiru Onam’ day is a unique Onam feast, with the name Onasadya or Onam Sadya, which a feast of rice with at least 15-20 other dishes served on a banana leave. In Malabar region, the Onam Feast isn’t just vegetarian dishes-they serve Chicken and other non-veg items too.

Vishakam is one of the most important days of the celebration, this is the day when preparation for the Onasadhya, or the Onam feast, begins.

The beauty of the custom is that each individual from the family needs to make some contribution to the feast preparations, regardless of how small it is.

The primary shopping items are dress & dress materials. Everybody will purchase garments for themselves and also as presents for their friends and family. Onam celebration is the greatest shopping season. You will find handicrafts and artefacts for over 90% sale during the Onam season. Gadgets and clothes are also available in a major discount in this season.

It is a splendid and beautiful celebration which celebrates a year of good harvest with lots of singing, dancing, and feasting.