Kerala is one of the most mesmerizing places in India. It features stunning tourism attractions that interest travelers from around the world. When we think of Kerala, the first thing that comes to our mind is its beaches. Without a doubt, it is immensely famous for its immaculate beaches. However, there is much more on offer in the enchanting and enthralling state of Kerala. The historical places are a must-visit too. In this article, we shall talk about 30 must-see places in Kerala with historical importance:

Wonderfully decorated by the Chinese tiles as well as Belgian chandeliers, the magnificence of Jewish Synagogue never fails to capture the heart of tourists. The best part is that none of the tiles that beautify this striking monument is similar to one another.

Also known as the Dutch Palace, this palace was constructed by the Portuguese and was later in 1955 was handed over to the Rajas of Cochin. It is the medieval attraction located at the Palace Road, Mattancherry in Kochi. The central structure of this great Dutch palace is one of the most amazing ones where they would hold auspicious events and functions of the Rajas of Cochin.

The Bolgatty Palace is one of those rare structures that have survived until now. Now it is a hotel and KTDC runs it.

Raja of Kochi gave this region to the Portuguese settlers in 1503 AD. They made this exceptional Fort as well as a lighthouse in this area to protect their commercial interests. Today, Fort Kochi has gained immense prominence. Its mesmerizing beauty has left tourists spellbound.

One out of the eight basilicas in India is the Santa Cruz Basilica at Fort Kochi. This church is famous for its amazing architecture of the gothic style and subsequently is an architectural heritage for India. It was a cathedral church for the Diocese of Cochin.

It is probably the oldest church of Europeans in India. In this church, they buried the body of Vasco-Da-Gama, the first Portuguese traveler to visit India. Later the body went to Lisbon in Portugal.

This fort symbolizes the modest beginnings of the English unlike the majestic entry of the Portuguese. The fort is a square structure constructed of laterite and is recognized by its huge ventilated walls and solid flanking bastions. They would imprison rebels at the fort.

Bekal is famous for its beach and fort. Its scenic beauty has made it a favorite among many filmmakers in India. Do not miss this if you are in Kerala. 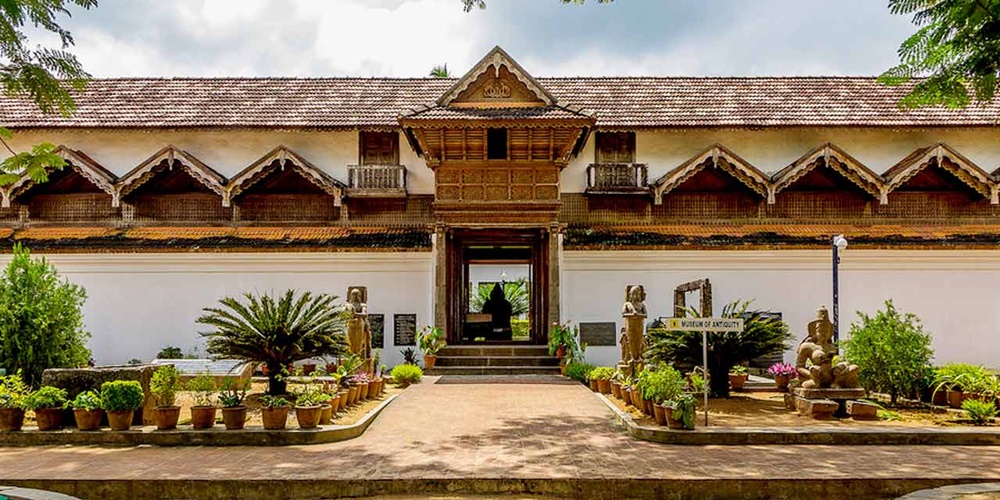 Speaking of heritage and culture, a visit to Kanyakumari would be incomplete without a visit to the Padmanabhapuram Palace – the regal side of this town. Constructed in the sixteenth century, this palace will change your idea of palaces! Padmanabhapuram Palace is a construction of wood! This is where the greatness of this royal palace lies – the unparalleled beauty of this signifies the glory of our nation and its architecture.

The Kayamkulam palace, close to the old temple of Krishna, however, a lot smaller than Padmanabhapuram palace, it is a classic example of Kerala’s architecture style. This palace was built by King Marthanda Varma. The antique sculptures, paintings, and bronze artefacts make it a worth visiting destination.

The brilliant Palakkad Fort covers the area of 15 acres of land of the town on the Western Ghats. The fort was built by the Hyder Ali, the Sultan of Mysore in 1766 AD. The fort gives the intriguing view of the town Palakkad. Presently the landmark is under the Archeological Survey of India.

The Hill Palace of the erstwhile royals is presently an archaeological museum and worth a visit. The architecture of this palace is influenced by the traditional Kerala style. In its valuables, it has collections from China, Japan and also the Indus Valley Civilization.

Gundert Bungalow is a popular heritage building, and a tourist attraction. It is situated around 20 km from Kannur. The bungalow lies on a delightful hill named Illikkunnu, close Thalassery town, and a river goes through the region making it an absolute visual treat. It was the home of Dr. Herman Gundert who lived here for around 20 years, doing his scholarly, literary and other activities. This place has historic and cultural significance.

Literally meaning “the stone in-between”, the Edakkal caves are a source of intrigue and mystery to archaeologists. These caves are situated on two levels with the engravings found exclusively in one cave on the second level. The cave offers us a view into the life of these clans that lived in this part of the world. Among those 15 engravings found there, there are engravings of a wheeled cart, a tribal queen, a couple of female and male figures, a deer and an elephant.

The Kaviyoor Thrikkakkudi Cave Temple, commonly known as the Rock Cut Cave Temple is an antiquated temple cut on a huge rock situated at Kaviyoor close to Thiruvalla in the Pathanamthitta area. Devoted to Lord Shiva, this temple also has archaeological significance in light of its close resemblance to the Pallava style of architecture. Other than devotees numerous history specialists and travelers visit this rock-cut temple so as to watch its stone engravings.

It is the tenth-century Karumadikuttan statue, a black granite statue of Buddha. It is located about 3 km from Ambalapuzha. This is known for traditional Kerala style architecture.

The Palace of Shakthan Thampuran situated in the locale of Thrissur is a milestone in the history of the Perumpadappu Swaroopam, the previous decision administration of Kochi. The palace situated in the center of Thrissur town is a noteworthy attraction, particularly for those with a special interest in prominent rulers and dynasties.

This fort is also known as Alikkotta or Ayakkotta. It was built in 1503by the Portuguese. It is currently one of the oldest existing European fortes in India, situated in the northern furthest point of the Vypeen Island. It’s a notable heritage site of Kochi that flock millions of visitors from across the world. This fort houses a rich cultural heritage and depicts a great past in the region of Kochi. Additionally named Ayikotta or Alikotta, this fort is constructed in a massive hexagonal structure.

This is the biggest town in the Wayanad district. This place got the name from the great hero Tipu Sultan when he evaded the Jain temples here. This place has a great historical significance.

It is an ancient St. Sebastian Church known as the St. Andrews Church also built by the Portuguese in the year 1851. It is located 22 Km north of Alleppey. The feast of St. Sebastian is held every year in the month of January.

The Peralassery Sree Subrahmanya Temple is situated around 16 km south of Kannur city on the Kannur-Kuthuparamba road. Considered as an old temple, it is thought that this spot of worship was constructed by Lord Rama himself. The god of the temple is the serpent form of Lord Subrahmanya thus when inside the temple, one can see many idols of the King Cobra.

It got its name from the former governor of Madras, General John Napier. The structure with its abundance of gables and turrets are delightful and the result of the creative ideas of the English designer Chisholm. It is a result of eclectic thoughts and merges different building styles. It is inside the historical center compound and near the notable Kanakakunnu (golden hill) Palace. A vault of fine masterpieces, it shows uncommon archaeological and authentic artifacts including ivory carvings, bronze idols, Stone sculptures and adornments dating from the eleventh century to the eighteenth century.

The main attraction here is the 250-year-old temple car of Lord Vishnu (Padmanabha), which shows amazing creativity. Other than this, objects carved out of wood, antique jewelry, models of temple, and so forth, make the museum worth a visit. The museum also has the name Thiruvananthapuram Art museum. Since it was there from 1855. it is the oldest in Kerala.

The red and white colored Palace is one of the major tourist attractions of the state. Located beside the Napier Museum, it is an architecture classic and is often the venue for cultural programs and exhibitions. It was initially built by the then King of Travancore, Moolam Thirunal on the peak of a little hill encompassed by meadows and grooves, it was utilized to hold royal banquets.

Halcyon Palace or Kovalam Palace was a palace that is now a luxury hotel in Kovalam. One of only a handful of attractions apart from the beaches in this interesting little beach town, Halcyon mansion is a monumental structure with a solid, colonial touch to the design. The design is really an intriguing mix of traditional Kerala architecture blended with the colonial style. Constructed by Rama Varma, Halcyon Palace was at first intended to be a retreat home for Raja’s family. After fulfilling that need for a couple of years, the government of Kerala bought it in 1964 and then it became a lavish hotel. 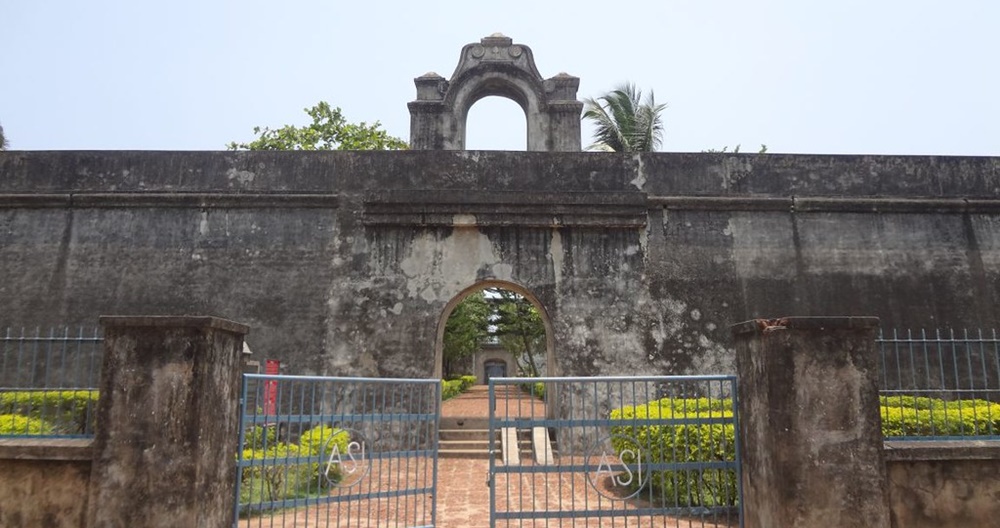 You can explore this fort on foot. Inside the fort, there is a cemetery dating back to 1704. A few steps the fort is the lighthouse that used as a signal station for the cruises and also ships from England. Climb to the top of the tower for some fascinating views of the Arabian Sea.

It is at the eastern entrance of Padmanabhaswami temple. This temple has a decent collection of antique things utilized during the rule of the Travancore kings. The museum has artifacts, wood carvings, paintings, huge chandeliers, marble sculptures, Belgian glass mirrors, weapons, paintings of the kings and also their thrones. As a former royal structure constructed by popular King Swathi Thirunal in 1844, it is additionally a walk into the royal lifestyle of the kings. The structure got the name Kuthiramalika(Horse palace) in light of the fact that the palace outside has many wooden horse figures carved into it. This lovely 80-room palace with two stories is in traditional Kerala design. 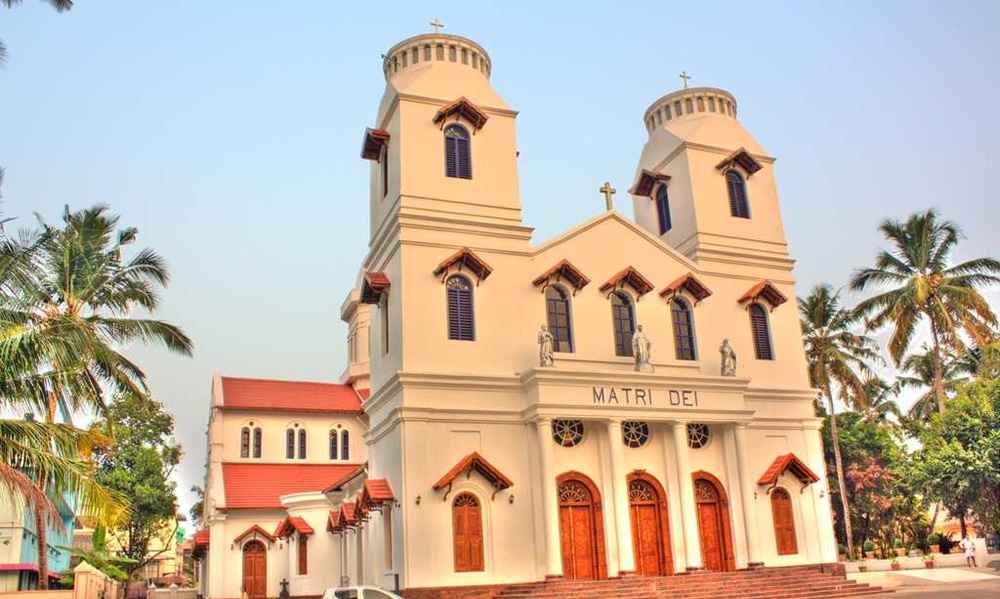 Matri Dei Cathedral, constructed in the Roman architecture style, is one of the oldest churches in the Malabar region. It has a 200-year old St. Mary Portrait. It has got the name Mother of God Cathedral.

It was constructed by Dom Francisco de Almeida in 1505, He was the first Portuguese Viceroy of India. This fort is close to the Arabian Sea around 3 km west from Kannur town in Northern Kerala. It is a huge triangular laterite fort with flanking bastions and also has a canal to shield it from animosities. It has an ocean wall projecting from the fort separating the rough sea and inland water.

This Elephant palace is one-of-its-kind in the world and is one of the biggest elephant-havens. The 10-acre palace was previously the land of the Kings of Punnathur and it houses more than 60 elephants.

Also, get to know some of the best heritage homestays in Kerala.

The best Heritage Sites in Kerala

Looking for top heritage sites of Kerala? In spite of Kerala being thought of as

One thought on “30 Must-See Historical Places in Kerala”