The best Heritage Sites in Kerala

Looking for top heritage sites of Kerala? In spite of Kerala being thought of as a scenic destination with only nature spots, it is also home to many of the best archaeological places. While enjoying the natural beauty of Kerala is often the primary goal of any tourist, many tourists even opt to explore the hidden gems of Kerala. These include various historical places in Kerala.

The heritage destinations of any place throw light on the culture of the area and give a slight glimpse into its past. You can get an idea of the people as well as events that were present at such a place. You can also learn a great deal about our ancestors and their customs and rituals. History is a great way to acquaint yourself with the past and prepare yourself for the future.

The Bekal Fort is the largest in Kerala and hence, is also one of the most visited ones. Built in 1650 A.D., the Bekal Fort was situated next to the beach in the Kasaragod District. The location of the fort along with the constant crashing waves paint a majestic view for the tourists. Even in ancient times, they would build forts with the basic necessities. The Bekal Fort is an evidence of this since it has a water tank and a tunnel. The Observation Tower in the fort gives you a clear view of all the surroundings. You can view a panoramic scene filled with tall, lush trees, a rock garden and sculptures.

Get more details about Bekal Fort

These famous caves are approximately 25 kilometres away from Kalpetta in Wayanad. These caves lie about 1200 metres above sea level. The insides of the caves feature unique pictorial writings. This signifies the use of written language as a means of communication. These writings date back to 6000 B.C.E. according to historians. This implies that this is the only archaeological site in India that contains carvings from the Stone Age. These drawings portray simple human and animal figures along with stone tools. You need to spend an entire day to trek through the whole site. Don’t worry too much about sweating; the cool temperatures of the cave will bring you relief.

Get more details about Eddakal Caves

The St. Angelo Fort was built by Dom Francisco de Almeida in 1505. Dom Francisco de Almeida was the first Portuguese Viceroy of India. The unique triangular fort is constructed using red laterite stones. The entire complex is located next to the beautiful Arabian Sea. The whole fort has large chapels, stables, a prison and an ammunition storehouse. There are also cannons present in the fort, but today they face the sea. You can also witness the Mappila Fishing Bay and the Dharmadam Island from the fort. The gardens surrounding the beaches are worth a trip too.

The Mattancherry Palace was also constructed by the Portuguese in 1557 A.D. A few years later, the Dutch seized control and renovated the palace. It got the name Dutch Palace beyond this point. This palace is comparatively small but has a lot of artifacts on display. There are attires, turbans and weapons of kings along with ancient maps, palanquins, umbrellas and the sword. A chamber in the palace depicts the Ramayana through its 48 paintings.

Get more details about Mattancherry Palace

This is a prominent archaeological site that has been existent since the 13th century. The unique building design of the Vijaynagar dynasty clearly visible in the architectural patterns. Initially, the temple was a shrine and then became a centre of commercial trade. Fast-forwarding to the 18th century, the temple became an ammunition store or battery. This occurred in the regime of Tipu Sultan, and hence, the surrounding area got the name Sultan Bathery.

This temple is quite ancient and is situated in North Wayanad. It is approximately 900 metres above sea level. Since the exact date of its construction is not known, historians have tried to place its birth around the 10th century. The Thirunelli Temple was an important pilgrim centre in the olden days. The surrounding environment of mountains and forests promote the picturesque view of the place. There are also the ruins of two villages. This is a 16th-century construction that is a wooden palace. It is situated at the foot of Veli hills in Kanyakumari. Kanyakumari is known as the southernmost tip of India. The palace also has an ancient clock (about 300 years old) that is kept away in the royal tower. There are also 17th and 18th-century murals along with hanging brass lanterns, and royal chairs with Chinese carvings. There are more displays to bring joy to the artistic heart.

Get more details about Padmanabhapuram Palace This fort is located about 32 kilometres away from the Trivandrum Central Railway System. It is also known as the Anjengo Fort. Built by the East India Company, this fort is one of the most excellent examples of early 16th-century architecture.

This temple is a must-visit for all Lord Shiva worshippers. The three feet long Shivalinga sits in a small cave with four walls. This location is a preserved monument by the Archaeological Department. 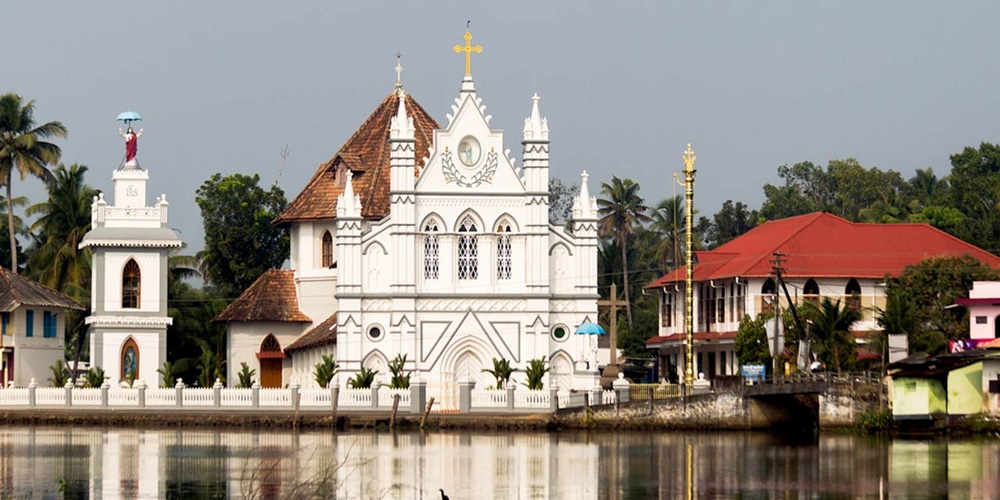 This St. Mary’s Forane Church was constructed when Mother Mary requested a few children to build this church where it stands proudly now. It was built in the year 105 A.D. It represents the Virgin Mary with a cross inscribed from the granite stones.

Veera Pazhassi Raja was known as the ‘Lion of Kerala’ after he was shot down by the Britishers. This descendant of the Kottayam family was recognized posthumously through the construction of this tomb.

The Thalassery Fort is present in the Thalassery town of the Kannur district in Kerala. It is a famous hotspot among tourists. It is a massive fort that is square in shape. The fort also has massive walls that have engravings and inscriptions on them. There are several other tourist places nearby.

We hope this list of heritage sites in Kerala will help all you history buffs out there!

Have a look also at some heritage accommodations in Kerala.

Kerala is one of the most mesmerizing places in India. It features stunning tourism attractions

Best Places to Visit in Thiruvananthapuram
List of Ayurvedic Hospitals in Kerala for Real Ayurvedic Treatments
Launch of Mobile App VIBGYOR to assits Treavellers in Munnar!
Why are Kerala Tour Packages Considered to be Best When Compared to Other Places?