Mattancherry Palace of Cochin has a quaint charm of its own. It is one of the oldest examples of the Portuguese architecture with oriental influence and is unique from the historical and architectural point of view. Built by the Portuguese in 1557 and presented to Raja Veera Kerala Varma of Kochi, the Palace was renovated in 1663 by the Dutch. As the Dutch revamped the Mattancherry Palace, it is also famous by the name of Dutch Palace. 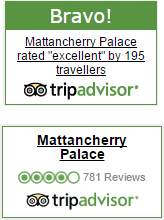 The Dutch Palace is a very small palace when compared to other palaces you see in India. But it has its own uniqueness. You do not have to struggle to reach this palace and it will take very less time for you to browse through it. There is no much ventilation in the palace, so it can definitely get humid inside.

It was the Portuguese who, after grabbing Cochin from the Dutch, had initially built the Mattanchery Palace in 1557. They, then, gifted it to the Raja Veera Kerala Varma of Cochin, as compensation for a temple they had destroyed, and also as a bribe to gain favors from the ruling dynasty. It was later, in 1663, when the Dutch wrestled Cochin from the hands of the Portuguese that the palace shifted hands. The Dutch revamped the Mattancherry Palace, which is why it is also famous by the name of Dutch Palace.

The palace with a small temple dedicated to Goddess Pazhayannur Bhagavati, who is supposed to be the protector of the royal family of Kochi, in the central courtyard is built like the typical Kerala style mansion. On either side of it are smaller shrines dedicated to Lord Krishna and Lord Shiva. The central hall on the upper storey was once used as the venue for coronating Cochin's Raja and has an intrinsically carved wooden ceiling. There's an entire gallery of royal memorabilia that consist of attires, turbans and weapons, from the days of the rajas of Kochi.

Apart from these, there are exhibits of Dutch maps of old Kochi, royal palanquins with floral designs, silver sequined gowns, royal umbrellas made of silk and brass, the ceremonial royal sword and other royal paraphernalia on display in different rooms of the palace.

The royal bedchamber known as "Palliyara" is located at the left of the entrance. It is famous for its low wooden ceiling and the walls that are covered with some 48 paintings depicting the Ramayana. These paintings date back to the 16th century and are preserved with much care till date. The murals that adorn the staircase walls are of Hindu gods and goddesses while the Royal Ladies room on the ground floor has paintings depicting the story of Kumarasambhavam by the great writer Kalidasa. There are five other panels in the room depicting Krishna Leela and Shiv Leela. The unique flooring, done with a mixture of burnt coconut shells, lime, plant juices and egg-whites is fascinating. It could easily be mistaken for a piece of black marble.

The Ernakulam Railway Station is just 10 kms away from the palace.