St Angelo Fort is a historic fort in Kannur. Built with red laterite stones, the fort rests on a cliff situated beside the majestic Arabian Sea and is surrounded by a beautiful garden. It has huge chapels, stables, a prison and an ammunition storehouse. The best time to visit the fort is during an early part of the day or during sunset. The fort is located about 4 km from the Kannur city centre. It takes about 12 to 14 minutes to reach the fort from Kannur. You will reach faster if you taken the Ayikkara Government Hospital Rd.

A popular historic monument in Kannur which is a must-visit for history buffs.
Editor's Rankings 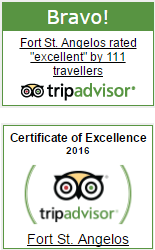 St Angelo Fort has a lot of infamous history attached to it. The architecture of the fort is pretty impressive and you will be fascinated to see it if you are a history buff. The location of the fort is simply stunning. Although the fort may not be very well-maintained all the time, it has some beautiful things to offer. One of them is the breathtaking view of the magnificent Arabian Sea which becomes even more special during sunsets.

St Angelo Fort was built in 1505 by Dom Francisco de Almeida, the first Portuguese Viceroy of India. Two years after its construction, the fort was attacked by an Indian ruler and it became the seat of the infamous Siege of Cannanore. After around a century, the fort was captured by the Dutch. They had made major changes to the structure of the fort and then sold it to Ali Raja, the King of Arakkal in 1772. About 18 years later, the British seized the fort and used it as their chief military station in Malabar until they left India in 1947.

At present, the St Angelo Fort is considered to be one of the most popular historic monuments in Kerala. It is under the control of the Archaeological Survey of India. Situated on the pleasant cost of the mighty Arabian Sea, the fort offers a fantastic view of the Moppila Bay and Dharmadam Island. Moppila Bay is a natural fishing bay, while the Dharmadam Island is a 5-acre island located just 100 metres away from the mainland in the Arabian Sea.

St Angelo Fort is a huge triangular fort made with red laterite stones and enjoys a tranquil environment today unlike its plight during the bygone centuries. The fort rests on a cliff, overlooking the Arabian Sea and is surrounded by an attractive, well maintained garden. The fort features huge chapels, stables, a prison and an ammunition storehouse. It also has cannons that are still fixed on its bastions facing the sea. Prisoners were kept in the dark prison rooms and food was given to them through a small opening once a day. So tourists would still feel the doomy air in those rooms.

A parking fee of 10/- is charged per vehicle.