A glorious temple of God’s Own Country, Kerala – the Chottanikkara Temple is situated at ‘Parasurama Kshetra’. With thousands of people visiting the temple every year; the temple is amongst the most popular Hindu temples in Southern India. It is devoted to the deity Bhagavathy who is worshipped as Goddess Saraswati in the morning, Goddess Lakshmi in the day, and Durga during the evening. The Goddess Bhagavathy here is also portrayed with the discus and conch – traditional arms that are believed to be wielded by Lord Vishnu. The Goddess depicts all three avatars of Shakti and when you move towards Chottanikkara Bhagavathy Temple from Ernakulam, you will hear the echo of people chanting “Amme Narayana, Devi Narayana, Lakshmi Narayana, Bhadre Narayana” from every direction. 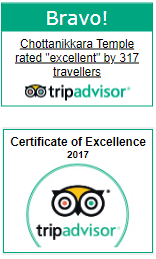 The atmosphere of the temple is serene and the temple is spectacular. Alongside its beautiful surroundings, this temple offers an incredible religious and spiritual experience to the devotees.

The temple is believed to be arond1500 years old and was built by a forest occupant named Kannappan. He loved his little daughter. To protect her from evil spirits, he started to sacrifice an animal every day to the Goddess Bhagavathy but one day he was unable to find any animal to sacrifice. He requested his daughter to give her pet calf for sacrifice but she refused saying he’d rather sacrifice her own life for the goddess. The calf spoke to Kannappan and revealed that it was the Goddess in animal avatar. After that Kannappan started to worship her at the place where the sacrificed the animals. The shrine was abandonment and later was found by a grass-cutter.

The Cochin Devaswam Board is in charge of the organization of the Chottanikkara Temple. This is one of the greatest holy places in the district. Apart from the primary place of worship of Bhagavathy Amman and Lord Vishnu, the temple complex houses other small shrines of Shiva, Dharma Sastha, Brahma, Anjaneya (Hanuman), Subramanya (Karthik), Ganesh, and the Nagas. The compound also has the temple of deity Bhadrakali or Keezhu Kaavu opposite to a vast lake (also called tank). People go to both the primary shrine and also the Keezu Kaavu , so that their prayers are complete. There are places to relax and also shops from where you will be ableto purchase puja essentials.

The Chottanikkara Amman and Bhadrakali Amman are known as the healing deities. Worshipping these deities are believed to cure even life-threatening ailments. The lower temple Bhadrakali is the goddess of exorcists of the Hindu religion. A 41 day long worship of the deity is known to heal the most dreadful of mental illnesses and paranormal possessions by malevolence spirits. There is an old 'pala' tree (Alstonia scholaris) in the temple. Those cured of possession by evil spirits and vindictive spirits drive a nail into the tree or into the fence that encompasses this tree. In earlier circumstances, devotees used to drive these nails utilizing their head rather than a hammer. Thousands of such nails in and around the tree affirm the miraculous cures that the goddess gives and the unbelievable faith that has been attracting thousands to this temple every year.

Men are required to take off their shirts prior to entering the temple. Ladies need to be dressed in either salwar suit or sarees to enter the temple.

Makom Thozal lasts for an entire week. It is a majestic event when the deity is dressed beautifully, elaborate pujas and processions are organized. Quite a few numbers of weddings take place at the shrine during this occasion.

How to Reach Chottanikkara Temple

The Chottanikkara temple is situated about 20 km from Ernakulam, one of the major cities of Kerala.