Situated at the tip of the Indian Peninsula, Kanyakumari is the southernmost point of mainland India. Kanyakumari is located near the Western Ghats and bordered by the Lakshadweep Sea. In the southeast boundary is the Gulf of Mannar, while on the South and the Southwestern part, the district is surrounded by the Arabian Sea and the Indian Ocean.

It's a noted pilgrimage site thanks to its Bagavathi Amman Temple, dedicated to a consort of Shiva, and Our Lady of Ransom Church, a centre of Indian Catholicism. It is the only place in India where one can enjoy the unique spectacle of Sunset and Moonrise simultaneously on full moon days.

Major centre of art, culture and religion since the ancient times.
Editor's Rankings 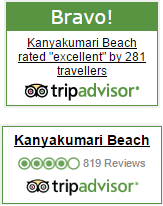 The fact that Kanyakumari is situated in the southernmost tip of India itself makes it special. The view of the ocean is simply mesmerizing, especially when you choose the right time to visit the beach. But apart from that, there are only a few tourist attractions to keep you busy and interested.

The town of Kanyakumari was known as Cape Comorin during British rule and is popular for watching sunrise and sunset over the ocean. It is 705 kms from State Capital, Chennai. This is a ‘rocky mainland’ on the Indian Ocean in the State of Tamil Nadu. Many call it KOODAL meaning it is situated at the Confluence of three oceans Bay of Bengal, Arabian Sea and Indian Ocean. Kanyakumari is popular because it is the only place on earth, where you can see the Sun Rise and Sun Set from the ocean. Located on the lap of nature this place offers full array of panoramic view to the tourists across the world. The rolling mountains, the plains, the sandy beaches, the colorful seashores and valleys all add to its beauty. Kanyakumari has been one of the major centres of arts, culture and religion since the ancient times. The various temples in this beautiful city of Tamil Nadu are frequented by thousands of pilgrims and the pristine beaches attract a huge no. of tourists to the city.

There are many places to see in Kanyakumari. Some of the most popular ones are mentioned here.

Kanyakumari Temple is also referred to as Bhagvaty Amman Temple and is one of the 108 Shakti Peetha in Hindu mythology. The temple is one of the major Hindu temples across India and is mentioned in almost all the ancient Hindu scriptures. This temple is 3000 years old and it is dedicated to Virgin Goddess Kanyakumari.

The Vivekananda Rock Memorial is located 100 meters from the shore. The small rock island can be reached by a ferry. The Vivekananda Mandapam and the Shripada Mandapam are the two main complexes of the memorial. Vivekananda rock memorial is built in memory of charismatic Philosopher Swami Vivekananda. This was built in the year 1970, imbibing various architectural styles prevalent in India. Very next to this rock is the Sripada Parai [divine foot mark rock] blessed by the imprint of Goddess’s feet on the rock.

The beautiful Gandhi Memorial was completed in 1956. Ashes of the Father of the Nation, Mahatma Gandhi was kept here in 1948 in an urn for the public homage. On 2nd of October every year the sun’s rays fall at the exact spot where the urn was kept before its immersion. A beautiful 79ft tall [marking the age of Mahatma] monument was constructed here and it is open for public viewing from 7:00 AM to 7:00 PM.

This was established in 1991 as a multipurpose Museum. Good collection of sculptured arte facts and crafts of South Indian Temples can be found here. Visitors to the museum can enjoy the extensive display of exhibits which covers a diverse range of interests such as anthropology, archaeology, numismatics, philately, botany, zoology.  It is one of the “Must See” places in Kanyakumari. Timings: 9:30 AM to 5:00 PM.  Holiday – Friday and second Saturday.

Thiruvalluvar is the immortal poet of Tamil Nadu and has given to the world Thirukkural. Thiruvalluvar Statue is one of the biggest in Asia and stands at a height of 133 feet [denotes 133 chapters of Tirukkural]. The 95 feet Statue represents the chapters of “wealth” and “Pleasure” is erected on a 38 foot pedestal which represents the 38 chapters of "virtue" in the Thirukural. The pedestal of the statue is artistically designed and is decorated with 10 elephants that signify the various directions. Visiting Hours are from 8:00 AM to 4:00 PM.

Panoramic view of landscape, seashore, Vivekananda Rock Memorial, Thiruvalluvar Statue etc., can be seen at View Tower and through Telescope. Visiting hours are from 5:00 AM to 7:00 PM.

It is said that Thanumalaya Swamy temple is the only shrine dedicated to the Trinity in India. The temples are built in the distinctive Dravidian style and are adorned with massive gopurams which are a common characteristic of all the Dravidian temples. Visiting hours are from 4:00 AM to 11:45 AM and 5:00 PM to 8:00 PM.

The fort was rebuilt in the reign of Marthandavarma, the Venad King, during 1741-44. Under the supervision of De Lannoy, the Belgian General, who served as the Chief of the Travancore army; East India Company’s troops were stationed there till the middle of the 19th century. Foundry for the manufacture of guns, mortars and cannon balls were also established within the fort under the supervision of the General. Now the government has set up a Biodiversity Park over here. Tourists can see deer, ducks, fountains, birds and over 100 varieties of trees inside the fort.

An enticing edifice to any lover of art and architecture this old palace of the Rajas of the erstwhile Travancore (1550 to 1750 AD) is a fine specimen of Kerala's indigenous style of architecture. The antique interiors are replete with intricate rosewood carvings and sculptured decor. The palace also contains 17th and 18th century murals.

Chitharal is a small village situated at a distance of 7 kms, from Marthandam and 45 kms, from Kanniyakumari. It is famous for the Rock-cut temple. Hillock at Chitharal has a cave containing Rock-cut sculptures of Thirthankaras and attendant deities carved inside and outside dating back to 9th Century A.D. It was converted into Bagavathy Temple in the 13th Century A.D. Cars and Vans can go upto the foot of the hill. One has to walk for about 10 minutes to reach the temple. The Jain images have been preserved Central Archaeological Survey of India.

The famous beach at Muttom is located about 16 kms from Nagercoil and 32 kms from Kanniyakumari. Muttom is famous for its beautiful landscaping and high rocks dipping into the sea at the beach-side. The sun set view point at Muttom is one of the most Panoramic view points in the district. Another attraction of Muttom is the century old light-house built by the British.

VATTAKOTTAI is a granite fort six kilometres north-east of Kanniyakumari cape, forms the terminal of a line of ramparts known as the South Tranvancore lines built by Marthanda Varma to serve as defence for Nanjil Nadu. It is rectangular in shape and covers an area of about three and a half acres. The fort is enclosed by walls 25 to 26 feet high, including the parapet, 29 feet thick at the front, 18 feet at the corners and 6 feet at the rear. The portion running into the area is the most strongly built under the orders of De Lannoy during the reign of Mathandavarma (1729-58). About 1810 A.D. the British forces under the command of St. Leger marched into Nanjilnad through the Aramboly pass and demolished the defence lines. The small river by the side of the fort, and the green vegetation all around add to the scenery of the fort and has now become a holiday resort and picnic centre.

This beach is about 10 kms from Kanniyakumari, is one of the best natural beaches of the district. The beach has shallow water and High sand dunes on the back ground. The tourists can reach the beach through the newly laid coastal road which is a very beautiful drive along the sea-coast.

Being a part of the princely state of Travancore and a major cultural and religious hub from the Sangam period, Kanyakumari is a place not to be missed on your visit to India. The above mentioned places are not only few of the most popular places in Kanyakumari but also the major attractions of India.