One of the most spectacular temple complexes of India, Sri Meenakshi Temple is a wonderful mix of legends, myths and some brilliant architectural techniques. The legend and beauty of the temple lends Madurai most of its current character, including the lotus-shaped city planning which has this temple as its centre.

Meenakshi Sundareswar Temple is dedicated to Sundareswar (form of Lord Shiva) and Meenakshi (form of Goddess Parvati). The term "Sundareswar" suggests "the beautiful lord" and "Meenakshi" means "the fish-eyed goddess". As per the Hindu folklore, Madurai is the same city where Lord Sundareswar (Shiva) appeared to marry Goddess Meenakshi (Parvati). Meenakshi Temple is regarded as one of the most sacred places of Parvati.

Be it the fascination for history or for the pure sense of devotion, you're sure to reach heaven at this temple. Give yourself at least 3 hours to appreciate the complex, among the best in South India. On any given day, you’ll be one among 20,000 visitors here. Renowned for its astonishing architecture, Meenakshi Amman Temple has been nominated for the new Seven Wonders of the World.

One can easily reach Meenakshi Temple by taking local buses, Rickshaws or by hiring taxis from Madurai. The city comprises its own domestic airport that is connected with all the major cities of India

A serene yet mesmerizing temple that makes Madurai the city that it is.
Editor's Rankings Meenakshi Temple is the most significant structure in Madurai. Without it, the city would look really empty. The grand architectural grandeur of the temple makes it a must-vist even for non-hindus. The temple is very well-maintained. The devotees just cannot afford to miss this one.

Meenakshi Amman Temple is a historic Hindu temple located on the southern bank of the Vaigai River in the temple city of Madurai in Tamil Nadu. It is dedicated to Parvati, known as Meenakshi, and her consort, Shiva, here named Sundareswarar. The temple forms the heart and lifeline of the 2,500-year-old city of Madurai and is a significant symbol for the Tamil people, mentioned since antiquity in Tamil literature.

Dedicated to Meenakshi, an incarnation of Parvati, and her husband Sundareshwar (an avatar of Shiva), the Sri Meenakshi Temple has Meenakshi as its central deity instead of Shiva, a marked distinction from the usual norm. Located on the southern banks of River Vaigai, the temple houses a black-stone idol of Meenakshi Amman in its main shrine and a swayambhu (self-appearing) lingam in the shrine close to it, marking Lord Shiva's presence.

Sri Meenakshi Temple  is also one of the few temples which has 4 gateways facing 4 different directions. The complex has several smaller quadrangular complexes and has 14 gopurams or towers, out of which the tallest is about 52 m high. The eye-catching vimanas over the shrine of the two central deities are another sight to behold, each with their own set of intricate carvings depicting humans, animals, demons and gods, both being plated in gold. A visit to this temple also calls for a visit to the Hall of 1000 pillars or Aayiram Kaal Mandapam (which in reality has 985 pillars).

Some of these pillars are also called Musical Pillars, which when struck, produce notes of Carnatic music. This was built in 1569 by Ariyanatha Mudaliar, with perfect symmetry and artistic vision. Each pillar here is intricately carved with figures of Shiva, Karthekeya, Ganesha and Rati (wife of Kama). If your heart still desires more, you can visit the in-house museum here to delve deeper into its 1200 year old history.

Before entering the temple, have a look around the Pudhu Mandapa . The main temple entrance is through the eastern (oldest) gopuram. First, on the right, you'll come to the Thousand Pillared Hall, now housing an Art Museum. Moving on into the temple, you'll reach a Nandi shrine surrounded by more beautifully carved columns. Ahead is the main Shiva shrine, flanked on each side by massive dvarapalas, and further ahead to the left in a separate enclosure is the main Meenakshi shrine, both open only to Hindus. Anyone can however wander round the Golden Lotus Tank and then leave the temple via a hall of flower sellers and the arch-ceilinged Ashta Shakti Mandapa – this is actually used as the temple entrance by most worshippers and is lined with relief carvings of the goddess's eight attributes, with perhaps the loveliest of all the temple's vibrantly painted ceilings.

Though the present structure was built between 1623 and 1655 CE, it is said that the temple was actually built in the 6th century BC by survivors of the Kumari Kandam. In 14th century, the Mughal Muslim Commander Malik Kafur plundered the temple and looted it of its valuables. It was rebuilt by the Nayak ruler Vishwanatha Nayakar around the 16th century. It was Vishwanatha Nayak who rebuilt the temple in accordance to shilpa shastra.

The story descripted on the stones is as follows:

Malayadwaja Pandya, a king of Madurai, was childless for a long time. He performed a number of yagnas (sacrifices made before a sacred fire) because he wanted an heir to his throne. On one occasion, a three-year-old girl came out of the fire and Malayadwaja adopted her. But the girl had three breasts and this worried Malayadwaja. However, a divine voice assured him that the third breast would disappear as soon as she met her consort. The girl grew into a brave and beautiful princess. She won many battles, but eventually lost her heart to Lord Shiva, when she met him on the battle-field in Kailas. As soon as she saw him, her third breast disappeared and she recognized her divine consort, for the princess was none other than Shiva's wife, Parvathi. After ruling over the Pandya kingdom for a while, they settled in the Madurai temple as Meenakshi and Sundareswarar.

Gopura: Pyramidal gates (gopuras) rise to a height of more than 50m. These towering gateways indicate the entrance to the temple complex at the four cardinal points, while lesser gopuras lead to the sanctums of the main deities.

Ashta Shakthi Mandapam: A visitor who enters the temple through the eastern gateway, first enters this Mandapam(Hall). This hall has a votive lamp-holder with 1,008 lamps, which are lit on festive occasions and present a spectacular sight. The sculptures on the pillars here relate some of Lord Shiva's Thiruvilayadals (miracles) and also the story of Meenakshi's birth and her life as the princess of Madurai.

Meenakshi Nayakkar Mandapam: This big hall is adjacent to Ashta Shakthi Mandapam, consisting of 110 pillars carrying the figures of a peculiar animal with a lion's body , and an elephant's head called Yalli.

Potramaraikulam (golden lotus tank): This temple tank is an ancient tank where devotees take bath in the holy water. The area around this tank was the meeting place of the TamilSangam - the ancient academy of poets. The tank is surrounded by a pillared corridor. Steps lead down to the tank, enabling worshippers to take bathe in it.

Oonjal  Mandapam: The Oonjal (swing) Mandapam and Killikoontu (parrot cage) Mandapam are on the western side of the tank. Every Friday, the golden idols of Meenakshi and Sundareswarar are seated on the swing in the Oonjal Mandapam and hymns are sung as the deities gaily swing to and fro. The parrots in the Kilikoontu Mandapam have been trained to repeat Meenakshi's name. But more interesting are the 28 pillars of the mandapam which exhibit some excellent Sculptures of figures from Hindu mythology.

Swami Sundareswarar Shrine: Lord Sundareswarar (Shiva) the consort of Goddess Meenakshi is to the north of Kilikoontu Mandapam . On your way you can worship a gigantic idol of Sri Ganesh called Mukkurini Pillaiyar. When the king Thirumalai Nayakar excavated a temple tank 3 km from Meenakshi temple he unearthed this idol of Vinayaka and erected the same here.

Vasantha Mandapam: Its pillars contain elaborate sculptures of Shiva, Meenakshi, scenes from their wedding as well as the figures of ten of the Nayak Kings and their consorts. This is also called Pudhu Mandapam.

The temple attracts 15,000 visitors a day, around 25,000 on Fridays, and receives annual revenue of 60 million. There are an estimated 33,000 sculptures in the temple. It was on the list of top 30 nominees for the "New Seven Wonders of the World". The annual 10-day Meenakshi Tirukalyanam festival, celebrated during April and May, attracts 1 million visitors.

Dress codes and security are strict for the temple itself: no women's shoulders, or legs of either gender, may be exposed, and no cameras are allowed inside. Evry evening at 9pm, a frenetic, incense-clouded procession carries an icon of Sundareswarar (Shiva) to Meenakshi's shrine to spend the night; visitors are welcome to follow along.

Thirupparankundram Murugan Temple:  It is one of the six places chosen by god Murugan as his abode. It is said that this was where Lord Murugan married Devasena. This cave temple is dedicated to the element of earth among the five elements and various Tamil classical texts mention this hill as ‘Southern Himalaya’.

Gandhi Museum: The museum houses a Picture Gallery, which presents Gandhiji’s visual biography. The history of Freedom struggle is depicted with 265 illustrations in the Special Exhibition section. The ‘Hall of Relics’ preserves some original and replicas of Gandhi’s personal belongings.

Samanar Hills:  It is situated 10 km away from the famous Meenakshi Amman Temple. The caves found here were used by Samanar, the Jains. It is believed to belong to 1 AD. The hill top offers splendid view of Madurai. A natural fountain that is ancient is found here and it is called Pechchi Pallam. It is a great place to spend considerable time in solitude.

Koodal Azhagar Temple:  It is considered one of the ancient temples in South India. It is dedicated to god Vishnu. It is situated 2 km away from the city’s west.

Pazhamudhir Solai:  This is yet another famous temple dedicated to Lord Murugan and it is located on hill top. It is considered as one amongst the six abodes of god Murugan.

Best Time to Visit: Throughout the year

Nearest Airport: A domestic airport is situated at a distance of just 10 km from the city centre.

Nearest Railway Station: Madurai is an important railway junction with nearly all the trains on the southern railway route halting here.

By Road: Two national highways, NH 7 and NH 45 pass through the city connecting it to the rest of south India. State transport buses plying from 5 bus stations spread across the city connect it to all the major neighbouring cities. 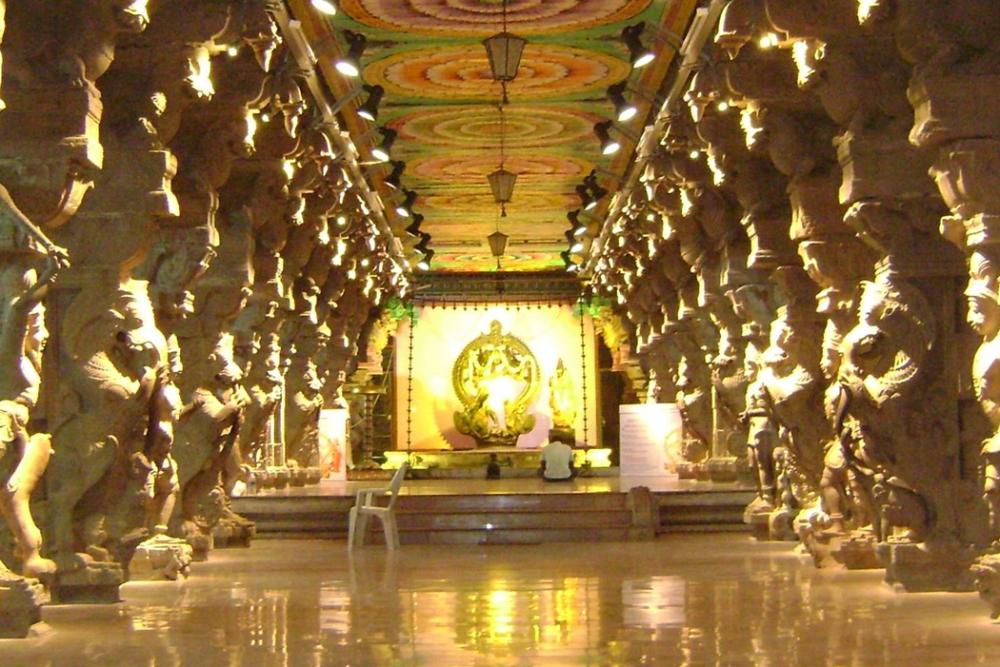