St. Philomena Church situated in Mysore, Karnataka and is recognized as the second tallest church of Asia. Being one of the most distinctive landmarks of the city, the church’s beauty is alluring, which is why it is frequently visited by tourists across the globe. Its foundation was laid in 1933 by Sri Krishnarajendra Wodeyar Bahadur IV (King of Mysore) for the European residents of the city and it started functioning in 1941. 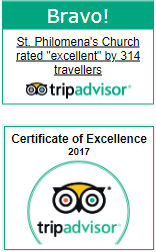 The church offers a peaceful atmosphere and boasts of Victorian or Neo-Gothic style of architecture. The Holy Masses performed here are worth attending.

Originally constructed in 1840, this church was earlier called St. Joseph Chavez. It gained recognition in 1933 during the rule of Sri Krishnarajendra Wodeyar IV, who built the church in order to cater to the needs of the European residents in Mysore then.

It was in 1926 that the Chief Justice and Diwan of Mysore, TRV Thamboo Chetty attained Saint Philomena relic from Peter Pisani (Apostolic Delegate of East Indies) that was transferred to Father Cochet who then requested Mysore’s King to build a church to honor the saint. Eventually, he permitted the church to be built and in 1933 and a foundation for the new church was laid. However, the church started functioning in 1941. The remains of St. Philomena are preserved in the church till today.

Legend has it that St. Philomena was the daughter of monarch of a small state in Greece. Monarch had no child and therefore, the couple prayed to God for a child. One year later, a daughter was born to them whom they named ‘Philomena’. Since childhood, Philomena was devoted to God. When she was 13, her father took her to Rome, where he had gone to seek help of Emperor Diocletian.

The emperor was mesmerized by Philomena’s beauty and wanted to marry her. But, she being a stern devotee of God, refused to marry him. Unable to handle the rejection, emperor tortured her and gave orders to execute her.

St. Philomena Church is significant because:

·         It is one of the oldest churches in India (over 200 years old) and is recognized as the second tallest church in Asia.

·         The floor plan on the cathedral is in the shape of a cross. Nave is the longest part of the cross and that is the congregation hall.

·         Transepts are the two arms of the cross and the fourth part that contains the altar and the choir is the crossing.

·         Holy Masses are performed in English, Kannada, and Tamil language, at the table in the sanctum sanctorum. St. Philomena’s statue is placed on the marble altar behind the sanctum.

·         There are stained glass windows from France with painting that depict the Last Supper, the birth of Jesus Christ, the Resurrection, and the Crucifixion.

·         This church is not only a place of religious importance but also a major tourist attraction in Mysore.

·         After Mysore Palace, St. Philomena Church is the second most visited tourist place in Mysore.

·         The annual feast organized here on every 11 August is a great deed towards humanity.

·         The construction of the church took complete eight years.

·         It was initially constructed for the European residents of Mysore but was later expanded as a need for larger church was felt with the growing European population in Mysore.

Special Masses are organized on Sundays and on festivals while everyday masses are conducted in mornings and evenings.

How to Reach St. Philomena Church

By Air: Nearest airport is at Mysore

By Road: St. Philomena Church is at a distance of 2 km from the Mysore Palace and 3 km away from city bus stand situated on Ashoka Road. One can hire a taxi or auto-rickshaw to reach the church.