Every day thousands of devotees visit Ettumanoor Mahadev Temple to pay homage to Lord Shiva, the presiding deity of the temple. It is considered to be the oldest Hindu temple in Kerala. It is an important stopover for the Sabarimala Ayappa Temple pilgrims. This temple is an architectural marvel constructed artistically having a copper roof. There are several wooden sculptures around the temple along with prominent statues of two bulls. 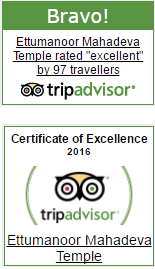 Ettumanoor Mahadeva Temple has some interesting mythical legends attached to its history. If you're a devotee of Lord Shiva and Lord Vishnu, this place should be of interest to you. Be careful of what you wear when you visit the temple. It would be best to visit the temple in the mornings.

Every day thousands of devotees visit Ettumanoor Mahadev Temple to pay homage to Lord Shiva, the presiding deity of the temple. It is considered to be the oldest Hindu temple in Kerala. It is an important stopover for the Sabarimala Ayappa Temple pilgrims. This temple is an architectural marvel constructed artistically and has a copper roof. There are several wooden sculptures around the temple along with prominent statues of two bulls. The complex also houses Dakshinamurthy, Ganapathi and Sastha temple. An engraving found in the temple indicates that it is 400 years old.

Though the idol of Shiva is an eight handed figure and is in a 'roudra bhava' (a very angry posture), the devotees only see him as a merciful god. Devotees refer the Lord in this temple as "Ettumanoor-Appan".

The temple legend states that once Lord Parameshwara/Shiva created a deer named Harina and also made an island in the sea called Harinadweep. When Parasurama created Kerala from the sea, this island also became part of the newly created land of Kerala. The original island came to be called Harinapura.

Pingala received divine knowledge from Kharasura. After the student’s education was completed, when the time came to seek gurudakshina, seeing that Pingala was penniless, Kharasura said that he did not seek anything from his disciple. Pingala was ashamed to hear this and with wounded pride insisted that his guru ask him for something. Pingala’s persistence became unbearable to the point that, in a fit of anger, Kharasura asked for 180 billion gold pieces. Hearing this, the disciple was speechless, stunned and heart-broken. Seeing Pingala’s anguish, the guru’s heart was filled with pity and compassion. He promised to help his pupil. They travelled to Harinadweep and performed intense penance to Hari (Vishnu) and Hara (Shiva). Lord Vishnu appeared first and asked what boon they were seeking. Pingala asked for and received 180 billion gold pieces. He promptly offered them to his guru. Shiva appeared next and Kharasura performed abhisheka to Lord Shiva using all the gold he had received. Lord Shiva, pleased with the maharshi’s devotion offered the same amount of gold to him.  Kharasura used the gold to perform abhisheka to Vishnu. Lord Shiva also presented him with three divine and precious Lingas. At this time, Pingala left having fulfilled his duty. Kharasura consecrated a Shiva Linga with his left hand at Harinapura.

Time passed and the original Shivalinga was buried in the dirt. One day, a Harijan lady called Mannathi, while digging for edible roots with her sickle struck the buried Linga. Seeing blood ooze from the stone, she panicked and threw away her sickle and basket. The sickle fell at a place currently called Kovilpaadam. Her basket fell at present-day Pattithanam near Ettumanoor. Shiva arose from the linga in anger and cursed her to become a rock (Mannathikkallu), which can still be seen near Kattampak Kottaram Devi temple. A conch arose from the earth next to where Shiva appeared. These two areas can still be seen as depressions (Devan piranna kuzhi, Shankhu piranna kuzhi). Later, the Shiva Linga was brought to its current location. The linga still shows the ancient groove made by the sickle. Every morning, after abhishek, this crack is sealed with sandalwood paste.

Ezhara Ponnana festival is celebrated at Ettumanoor Mahadeva Temple with a grand scale on the Thiruvathira day in February-March every year. Hundreds of devotees gather here on the 8th and 10th day of the festival . 'Ezhara' means seven-and-half and 'Ponnana' means golden elephant. Each of the seven elephants is two feet high and the eighth one is one foot only. Hence they are together called seven-and-half elephants. These elephants were offered to the deity by the then ruler of Travancore, Anizham Thirunal Marthanda Varma.

The Thulabharam is one of the important rituals of this temple. People make offerings to God for favours received. On balance, the child or man for whom offerings were promised to God, is weighed against offerings ranging from gold to fruits.