Vaikom Temple is located 8 km away from Kumarakom in Vaikom. The temple is related to Lord Parasurama, who is an embodiment of God Vishnu. Vaikom temple is built in the typical Kerala style architectural and is well-known for its unique cultural performances and elephant pageant.

This temple is devoted to God Shiva and attracts tourists at the time of Vaikkath Ashtami celebration, which takes place each year in the months November or December. As per the legends, Lord Shiva’s idol in this temple is from the 'Treta Yug' and the temple is amongst the oldest temples in Kerala. 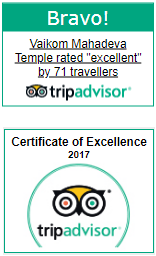 It is a must visit to know more about Hindu religion. The temple is divine and as per belief, can fulfill wishes. Last but not the least; enjoy some time boating over the clean waters of Vaikom Lake.

After worshipping this Shiva Lingam for several years, saint Vyaghrapada went on a pilgrimage. Saint Parasurama was passing by this place one day when he saw a Siva Lingam in water with holy rays. He understood this as the Shiva Lingam placed by Kharasura. Hence he worshipped this Shiva Lingam to attain moksha.

Also, saint Parasurama built the Vaikom Temple here. All the customs at this temple are plans of Parasurama.

The Vaikom Temple is one of the three powerful Shiva temples of Kerala.

The temple is over 8 acres of land. The temple has four walls while the premises is leveled by river sand.

Near the Balikalulpura there is a stone image. This is Lord Ganesha’s statue. The Balikalulpura refers to the sacrificial stone. The inner roof of the Namaskara Mandapa shows stories from Ramayana. There is a single rock cut statue of Nandi. Nandi is the vehicle of Lord Shiva.

The Shiva Lingam is six feet in height. It is of black stone. The Lingam wears chandrakala. It is the crescent. The Lingam also has three eyes, nose, and four hands. Gold ornaments decorate Lord Shiva.

Women can visit Vaikom Mahadeva Temple in traditional dress. Churidar, sari and pavadai chattai are some dresses that ladies can wear to this temple.

Vaikkath Asthami: This is the most popular festival at the Vaikom Mahadeva Temple which takes place in either November or December.

Shivaratri: This is also a popular festival at the temple.

By Air: The closest airport is Cochin International Airport. It is about 76 km from the Kottayam district.

By Rail: The Vaikom Road Railway Station is the nearest rail line. The Kottayam is also not far. It is only 25 km from the temple.

By Road: The Vaikom Mahadeva temple is only 33 km from Ernakulam. There are regular bus services from all major cities in Kerala.