Talakaveri is situated on the lap of Brahmagiri hills, which is the part of Kodagu district. Bhagamandala is a point where the three rivers meet. The three rivers are Kaveri, Kannike, and the bus terrain Sujyoti. This point is also referred to as the TriveniSangam. The availability of HoliKund is considered to be auspicious for the tourists who worship goddess Cauveramma Devi Thayi. However, the devotees of Lord Agasthiswara also visit this place and take a dip in the holy river Kaveri to get relief from all the mental and physical stresses. The devotee’s beliefs that the water of this holy river has magical powers and the capacity to heal miseries.

A religious place ideal for a weekend trip
Editor's Rankings 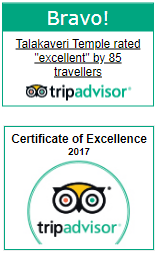 The place is ideal for the tourist or the visitors who want to take their weekend off to a religious place. This area is also popular because of its natural beauty and the availability of quality accommodations that will bring the visitors closer to both nature and God.

As per the mythology, the marriage of Lord Shiva and Goddess Parvati resulted in the unbalancing the earth. As a result, Lord Shiva ordered Sage Agasthya, go to south encounter the balance tilt in the north. Meanwhile, Lord Indra was cursed to hide in the Lotus stalk and Lord Narada suggested Lord Indra to pray to Lord Ganesha and bring the holy river when he was hiding. Lord Ganesha, tipped the kamandal that was carried by Sage Agastya, which resulted in the formation of a temple that witnesses the marriage in disguise. The temple Talakaveri also have the Shiva Linga, which was installed by Sage Agastya and is also dedicated to Lord Agastheeswara.

Talakaveri is situated in the Brahmagiri Hills Kodagu district of Karnataka. It is a holy place for Hindu devotees and thousands of pilgrims mark their presence every year. This temple also has a holy kund in its premises. As per the mythology, it is believed that a single dip in this pond is responsible for relieving the mankind from physical and psychological stresses.

Numerous stories are associated with the sample the major one accounts to the significant story of the marriage of Lord Shiva and Goddess Parvati. The story ended up with the formation of Talakaveri, also known as the formation and start Point of Kaveri River.

It is suggested that the tourist should opt the road means of transportation. As this will further make them familiar with the beauty of nature. The roads will cross the forest areas, the coffee plantation and even waterfalls that will further attract the tourist. The temple is also full of numerous stone craved idols and masterpiece of the art that describes the culture and art work of that historical era.

In order to ease the tour, numerous big and small accommodation and hotels are also available for tourists. The tourists can enjoy the quality Coorg food along with the south Indian and north Indian food. The availability of taxi and buses further eases the mode of transportation. In addition, this place is also equipped with banks and ATMs, pharmacies, internet cafes along with local tourism information centers further eases the tour.

Since Talakaveri is a religious place, hence the visitors are advised to dress up decently. In order to discourage the visitors from wearing the Bermuda or sleeveless tops, the BhagamandalaTalakaveri temple Management Committee enforced the decision to wear decent and traditional clothes during the visit. Additionally, two counters are also opened at the temple town, which provides dhotis for men and shawls for women on a rental basis.

During the annual festival, the Talakaveri Temple gets crowded with the tourists from all over the country to witness the puja and the traditional ceremony of this temple. During this time the temple is completely decorated with light and diyes.

How to Reach Talakaveri Temple

Talakaveri Temple is located near to Brahmagiri hills and the place is well connected with the road transportation. Both Karnataka State Road Transportation Corporation and private buses connect this place exceptionally well. 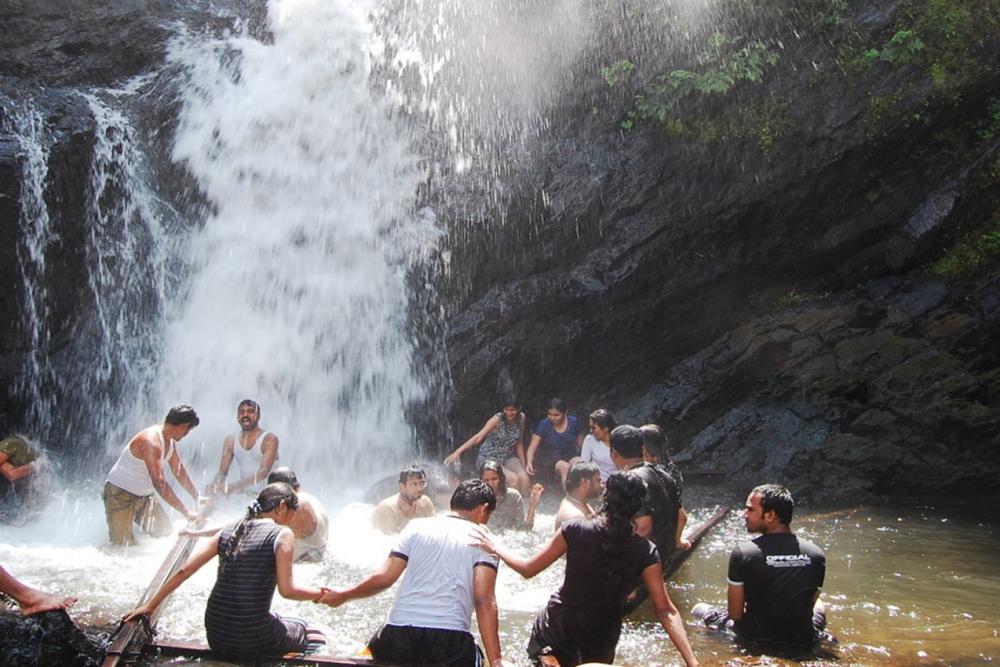