Ambalappuzha Sree Krishna Temple is a famous Hindu Lord Krishna temple situated 14 km south of Alappuzha in Kerala, India. Ambalapuzha Temple was built by the erstwhile ruler of Chembakasserry Sree Pooradam Thirunal Devanarayanan Thampuran during 15th – 17th AD. The idol of Krishna here is carved out of black granite stone holding a whip in His right hand and a conch in the left.

A significant temple in Kerala popularly known as Dwaraka of South.
Editor's Rankings 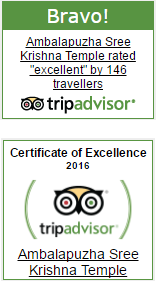 The atmosphere of the temple is calm without a lot of crowd. Some of you may have a problem with the dress code of the temple. There are not many places to eat near the temple, but there are quite a few souvenir shops.

The Ambalapuzha Sri Krishna Swami Temple is a major pilgrim centre. It is one among the five significant Krishna temples in Kerala. The temple is famous for its unique prasadam, the delicious Ambalapuzha Palpayasam – a sweet porridge made of rice, milk, and sugar. Ambalapuzha Sri Krishna Temple is often referred as Dwaraka of South. It is believed that the idol of Sree Krishna of Guruvayoor Temple was brought here for safekeeping during the raids of Tipu Sultan in 1789.

Ambalapuzha Arattu is the main festival celebrated at the temple for 10 days during the Malayalam month of Meenam (March – April). An important feature of the temple festival is the Velakali - a unique martial dance form performed during temple festivals. Ambalapuzha Moolakazhcha is another important ritual held in the temple during the Malayalam month of Mithunam on the Moolam asterism (Mool Nakshatra).

Champakulam Boat Race is held on the Prathista day (idol installation day) of Ambalapuzha Sreekrishnan idol in the temple. It is also in this temple that 'Pallipana' dance is performed by 'Velans' (sorcerers), once in twelve years.

Paintings of the Dasavatharam (the ten incarnations of Lord Vishnu) are on display on the inner walls of the Chuttambalam.  The temple is also associated with the birth of the famous performing art form of Kerala – Ottamthullal. It is believed that legendary Malayalam poet Kalakkaththu Kunchan Nambiar gave birth to this unique art form in the Ambalappuzha Temple premises. The Mizhavu (a big copper drum used as a percussion instrument in performing arts) used by Kunjan Nambiar is still preserved in an enclosure in the temple.

Thunjathu Ezhuthachan, who is considered as the father of Malayalam language, is believed to have penned Adhyatma Ramayanam Kilippattu (a translation of the Ramayana and Mahabharatham or Mahabharatha ) in the temple.