Situated on the banks of the River Valapattanam, Parassinikadavu Sree Muthappan Temple or Parassini Madappura Sree Muthappan Temple draws in individuals from all sections of the society; regardless of religion or class. One of the intriguing realities is that here dogs are thought to be holy as it is the vehicle of Lord Muthappan. 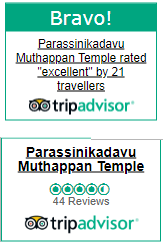 One of the most sacred pilgrim sites in Kerala, the temple offers free meals and accommodation to all visitors. This temple is a must visit for its spiritual significance.

The tale of the Lord Parassinikadavu Muthappan is fascinating as well. The story depicting the foundation of the god is an infant in a bin floating on the stream is found by a Brahmin woman Padikutty who raised the child as her own. She was a follower of Lord Shiva thus she viewed the baby as a gift from him. Padikutty and her spouse were also called as Naduvazhi Ayyankara Brahmins. They raised the infant as a Brahmin child. Be that as it may, when he grew up, he ended up being a hunter and offered food to poor and the destitute. Furthermore, to their despair, he began eating fishes which were totally against the Namboothiri brahmin culture. Ayyankara Vazhunnavar and Padikutty, after not succeeding by requesting him t stop, reprimanded him. The shame influenced him to expose his actual form ‘Viswaroopam’ or the cosmic all-pervading avatar to his parents. They surrendered to his furious avatar understanding that he's an incarnation of Lord Shiva. Then he began his excursion from Ayyankara, crossed numerous villages and reached to a tribal family. He was then named as Muthappan by the tribal community. They worshiped him as a God who helped and protected them.

Sree Muthappan is a Hindu god worshipped normally in Kannur region of north Kerala state, India. Muthappan and Thiruvappan, are thought to be avatars of Shiva and Vishnu, and henceforth Muthappan completely represents the thought of Brahman, the unity of God, as told in the Vedas.

Lord Muthappan’s worship is one of a kind, in that the Satvik (Brahminical) type of worship is not followed, like in other temples. The primary method of love isn't by means of idol worship, but through a traditional performance of Muthappan, performed every day at the Parassini Kadavu sanctuary. Fish is offered to Muthappan, and individuals of all religions, nationalities and castes are allowed to go into the temple and worship Muthappan.

Muthappan is the primary god in the formal Theyyam dance or Muthappan Theyyam that is performed in this popular Parassinikkadavu temple. The Muthappan Theyyam performers belong to the native group of Kerala. This is extraordinary due to the fact that in Kerala both the lower-caste tribal community and the upper-caste Brahmins have a critical commitment to the worship of Sree Muthappan.

Fish and hard stuff are the standard offerings to Muthappan and they are distributed here. The temple is likewise well known for Theyyam, a custom dance that is performed here once a day.

There is no such clothing regulation or limitation for any sort of dress for entering inside Muthappan madappura. You can wear your own particular choice of dress and have darshan. Only thing that you need to do is keep your footwear outside.

The nearest airport is the Calicut International Airport, at a distance of 137 km from the temple.

The nearest railway station is Kannur Railway Station, at a distance of 20 km from the temple.

Parassinnikkadavu is 4 km from Kadambery. There are buses, auto-rickshaws and taxis are available to the temple.